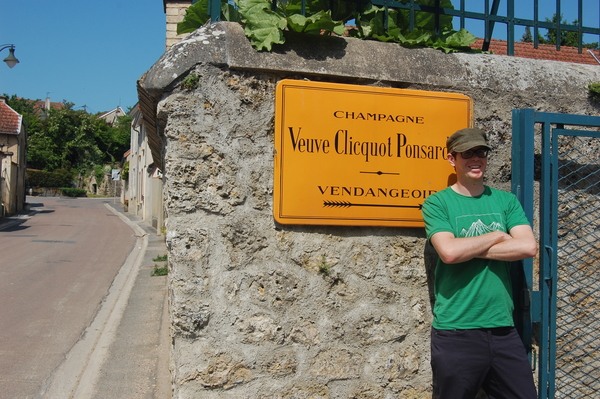 Caro’s grandmother rang us on Skype, being the high-tech senior citizen that she is, and asked us if we’d bring her and the grandfather on a jaunt up to their friend’s vineyard in the Champagne region.

Such opportunities to bath in Champagne don’t come very often so we jumped at the chance.

It’s also interesting spending time with old people. They tolerate less bullshit. They don’t tell you stories to impress you; in fact, they really don’t give a shit what you think. They also appreciate the simple things in life – good food, good alcohol. You can learn a lot from old people, especially if they of a happy disposition.

So that’s how I spent several days ensconced in the Champagne Region, the source of all the world’s Champagne. I’m pretty sure the French developed nuclear weapons to defend their exclusive right to make champagne. You don’t fuck around with the French and their Champagne.

It’s a funny place. It’s in the countryside, so no big change from Saint Junien, and it’s full of unsophisticated farmers, growing their vines and finding outsiders very shifty. The slight difference from most farmers is that they are all obscenely rich.

In one farm yard of I saw a special tractor for driving through the vines (they look unusual) and, very casually, a Ferrari.

We stayed with an old lady who ran the champagne-producing enterprise. Like all upstanding functional alcoholics of the Catholic faith, she frowned upon drinking before 12:00 in the day and was incredibly homophobic. Being France, she was also a staunch socialist. We were watching a delightful French soap featuring a gay marriage. She was outraged.

Caroline asked if she would sell Champagne for a gay marriage. She said she would, but she wouldn’t be happy about it. It seems the love of money overcomes all discrimination.

In a weird arrangement, the lady in charge ran the farm with her ex-son-in-law. He’s an ex-son-in-law, because the daughter died in her fifties (presumably due to the 5 bottles of Champagne we drank daily).

Caroline’s grandfather commented that the ex-son-in-law only married her for the vineyards because she was ugly as hell.

I love how old people don’t give a shit about being polite. They’re hilariously honest.

We had a grand tour of the entire Champagne-making facilities. I was horrified to learn that they mix all the grapes from the various farmers together and make one single wine from it. All the different brands come from this one vines. Vines owned by Veuve Cliquot grow side-by-side with grapes by every other brand. A marketing scam!

Apparently, the individual taste of the different brands come from the various secret tricks they have when adding the sugar. I’m entirely unconvinced and would be outraged if it were not for the fact that Champagne tastes awesome anyway. On the other hand, I was delighted to learn that rose Champagne really is made from mixing red wine with white wine (20 – 18% red wine). The current fashion, however, is towards lower percentages of red wine in order to give a lighter shade of rose. This fact is just another reason why you read my blog.

But the really great thing was spending four quality days with Caro’s grand parents. I don’t often party with octogenarians, but when I do it’s great to have about 20 bottles of premium champagne at hand.