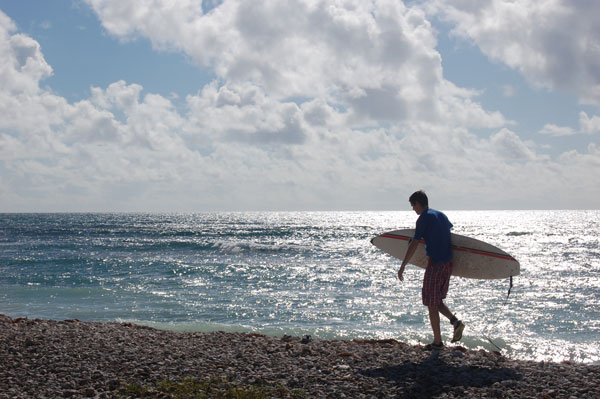 My breakfast was not feeling so good.

I was paddling my surfboard back to the line-out.

I was blinded by the sun, the warm water was stinging my eyes, and I had no idea what I’d done wrong. Trying to take the last wave, I managed to enter “the washing machine”, and had got flipped head-over-heels by the wave about 3 times. I just avoided being decapitated by my own board. A poor death that would have been.

“You were about 10 cm too far forward on the board“, Oliver, my Basque surf teacher, screamed across the water at me, his eyes burning with rage at my ineptitude. I wept an apology for my poor positioning.

A few minutes later I was cutting right on a wave, this time standing up on the board, feeling on top of the world.

A few centimetres and a word of guidance made all the difference.

This winter I’ve been spending my time in Guadeloupe in the Caribbean learning how to surf. It’s been difficult, because big waves scare me.

This is what I learned about learning – meta-learning.

Finding #1 – If I’m going invest my time, I’m going to invest money, too

I was always a cheap-ass when it came to learning a language, going to the gym or learning to rock climb. I’d try to figure out the cheapest way to do it, avoiding expensive lessons and learning via YouTube.

The problem? It’s frustrating, because you make a lot of rookie mistakes and your progress is slow.

If you visit me at my parent’s place, I can show you a wide and assorted collection of sports gear, including, but not limited too: 3 kites, 3 surfboards, 2 boats, 1 long board. There’s probably lots more, but I can’t think of them right now. Most of it was never used more than 10 times.

The point is this: When I wanted to start a new sport/activity, my impulse was to buy gear first. Partially because buying new gear is awesome and partially because it seems a waste to spend on lessons when you can just the gear and “figure it out”.

But now I think that this is the wrong approach. With surfing, I had much better success spending hundred of euros on lessons before buying a surfboard. First off, I could practice on a big beginner board and thus quickly progress to a smaller board. Secondly, after a month of lessons, I had a much better idea of whether I liked surfing and what board would be good for me. An informational advantage like that means you won’t get ripped off when buying a board, and you’ll buy something that you can actually use.

Top Tom’s Tip: Avoid a cheap, sexy shortboard ’cause you’ll flounder around on it like a drowning rat for a few weeks before giving up.

Yes, now you think I’m a big weirdo. Great. I did get obsessed with surfing, thought about surfing most of my (free) time, watched countless videos, spent up to 5 hours a day surfing. In fact, Caro and I decided to ratchet it up a notch, so we moved to a surf camp for one month, where we were surrounded by much more experienced surfers, who, well, pretty much just talked about surfing.

Before breakfast, I’d practice a few take-offs on the kitchen floor. Antoine, a French investment banker/surfer, would study me seriously, stroking his moustache  and give me tips for improvement. Nobody though I was weird in the slightest. Fantastic.
I’m leaving Guadeloupe for France now, but I have a new project coming on. In May I’ll be in Berlin for a month doing CrossFit in Kreuzberg. Should be fun/hell.